Joni & Brandi & All the Women & Gentle Everyone & Armchairs & Music & Joy! 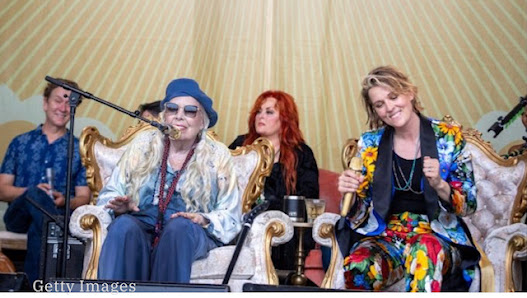 In her memoir Broken Horses, Brandi Carlile talks about her wife Catherine throwing down hard 😂 when they were dating, saying that if Brandi didn’t listen deeply to Joni’s music, Catherine really didn’t see a future for the two of them.
Brandi fell in love with Joni’s music, particularly Blue — and more deeply in love with Catherine 😉 and vice-versa — and part of what makes Brandi a good egg : ) is not just that she’s a powerhouse singer-songwriter with the twins + cellist & entire sweet band, but that as a producer and music-community person, she champions women who are somewhat out of or entirely out of the limelight of the music industry and reminds everyone of their greatness, widening listenership into other genres — Joni Mitchell…Tanya Tucker… Mavis Staples… (all still pure greatness who never went anywhere, but part of a fickle-seeming business which appears to sometimes prize very young talent).
Brandi works on many projects at once, and in her book, she mentions Joni inviting her over to her house to jam with friends.  Catherine would tell her: do more of that, please, make time for that.
In the Newport Folk Festival footage, it is so striking to see a livingroom-setup of beautiful, cozy armchairs on stage — maybe like a Joni jam shared with the public.  Seated in an armchair next to Joni 😎 is Brandi 🌈 and so many other friends.  Behind Joni, is Winona 💚 During Both Sides Now, Winona looks heaven-ward and it feels palpable that she’s thinking of her mom, Naomi. It’s heart-breaking and maybe also healing for Winona, hopefully 🙏 to be washed over with song from her mom’s contemporary.  Winona’s subtle harmonies are stunning and feel heaven-sent.
Getting to hear Joni’s voice and see her up there onstage, even on a small phone screen, felt in the realm of spiritually profound.  Immediate tears.  I had craved and needed that very sound.
Joni’s friends, known or unknown, too, no doubt envisioned and helped with aspects of that show and saw that stage picture like a dream, too.  All this to say, behind every great woman (and sometimes seated next to), is the encouragement and influence of another great woman, championing one another.  Brandi champions Joni, Joni inspired Brandi, Catherine champions & wrangles everyone 🙂 and on and on…  That’s kind of the best of what music-community is ❤️ (And sweet dudes and non-binary friends, too, who support powerful women, but lots of divine women to appreciate.)
Posted by Amanda Gates-Elston at 8:09 AM
Email ThisBlogThis!Share to TwitterShare to FacebookShare to Pinterest